About Tertiary and Secondary Materials

About Secondary and Tertiary Legal Materials

Tertiary legal materials COMPILE, LIST or DIGEST information on the law from other sources.

Tertiary materials provide overview and background and include reference tools which help find the law:

​Note: Tertiary Materials are NOT considered acceptable material upon which to base academic legal research, so cannot be included in Reference Lists

Secondary legal materials are those materials which are ABOUT the law.
Secondary materials assist sourcing relevant primary materials, as well as interpreting and discussing these:

Primary legal materials are the documents containing the written records of the law:

Legal dictionaries include definitions from legislation and case law.

The plain or common meaning of a word is not necessarily the same as the legal definition.

The plain or common meaning of a word is not necessarily the same as the legal definition.

Legal dictionaries will include definitions from legislation and case law:

Words and phrases are defined by parliament in legislative instruments such as Acts and Regulations.
There is often a section in any given Act which contains definitions of various words or phrases used in the Act.
This can usually be found at the start of the Act.
The headings of such sections vary. Some say ‘Interpretation’, others ‘Definitions’, others ‘Terms used’.
If a definition is not given in an Act, check the Acts Interpretation Act 1901 (Cth) or the Interpretation Act 1984 (WA) for a standard definition that can apply to all Acts unless otherwise stated.

Sometimes a judge will define or clarify the meaning of a word or phrase in a judgment.
This is referred to as 'words and phrases legally defined'.

Legal encyclopaedia are useful when commencing research in an area of law that is new to you.

(Books provide overviews and in-depth information on a topic.)

Mine the Reference List at the end of each chapter, and conclusion of the book for further study resources.

Books are useful to find overviews and in-depth information on a topic.

The Table of Contents identifies key concepts within a topic.

Mine the Reference Lists at the end of each chapter and at the conclusion of the book for further study resources.

The Law Library is located on Level 3 of the Library (entrance level).

Legal commentaries and updating services provide guidance in applying the law on a particular subject area.

Many commentary services include in-depth, practical insights, together with extensive illustrative material, enabling an appreciation of both the technical and procedural aspects of the law. 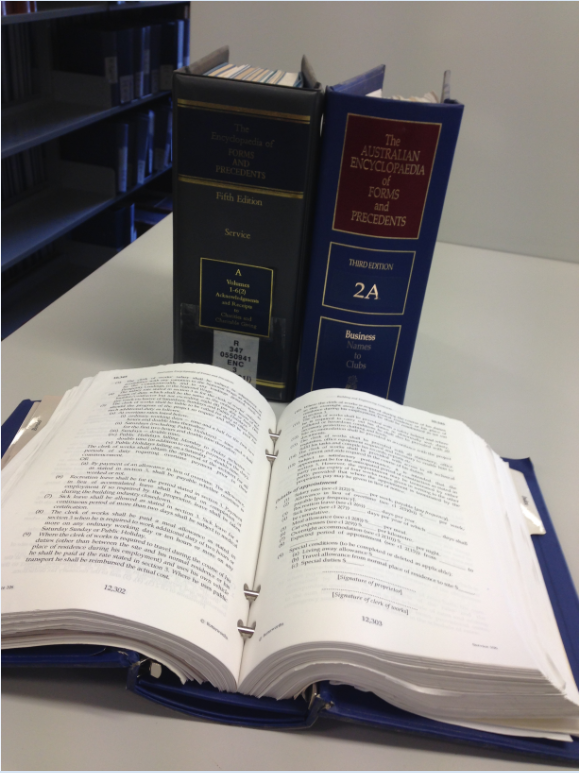 Printed commentaries were known as loose-leaf services that were published as a series of unbound pages, often stored in a ring binder, and regularly updated.

Updates would consist of packs of pages that would replace out-dated information and need to be inter-filed into the existing binder.

Extrinsic materials provide guidance on the meaning behind, and the intended purposes of, an Act of Parliament.

Extrinsic materials are materials which do not form part of the Act itself, but assist in the interpretation of the Act.

These materials can include:

How to Source Tertiary and Secondary Materials